Hey, I'm Petra Kis-Herczegh (she/they) and I'm a Senior Solution Engineer with an SEO focus at Yext. My job is to help potential and current clients understand our Solutions and how they can help them achieve their business KPIs. I started my SEO career in 2017 as an in-house SEO, quickly progressed to become an SEO manager and later moved to the world of Software, with the goal to amplify the voices of SEO at leadership level and help prove the value of organic search.

For the past 2+ years, I've been leading an internal monthly project called 'What's new in SEO', where I share updates and news from the world of search engines. Today, we are bringing this initiative to the Hitchhikers community.

In-person events are back at an international level, and how wonderful is that?! The year started off with the amazing Women in Tech SEO conference. It was one of the last in-person conferences before the world went into lockdown in 2020. It was brilliant and empowering to be in the same room again with so many impressive women in this industry.

The Spring brought us many more meetups and events, including Search London and London SEO XL on Star Wars day. We got to see Martin Splitt talk about rendering as a stormtrooper, and John Mueller being the most patient and kind human being, taking all the selfies and answering all the questions at BrightonSEO. It's been awesome to come together again as an industry. 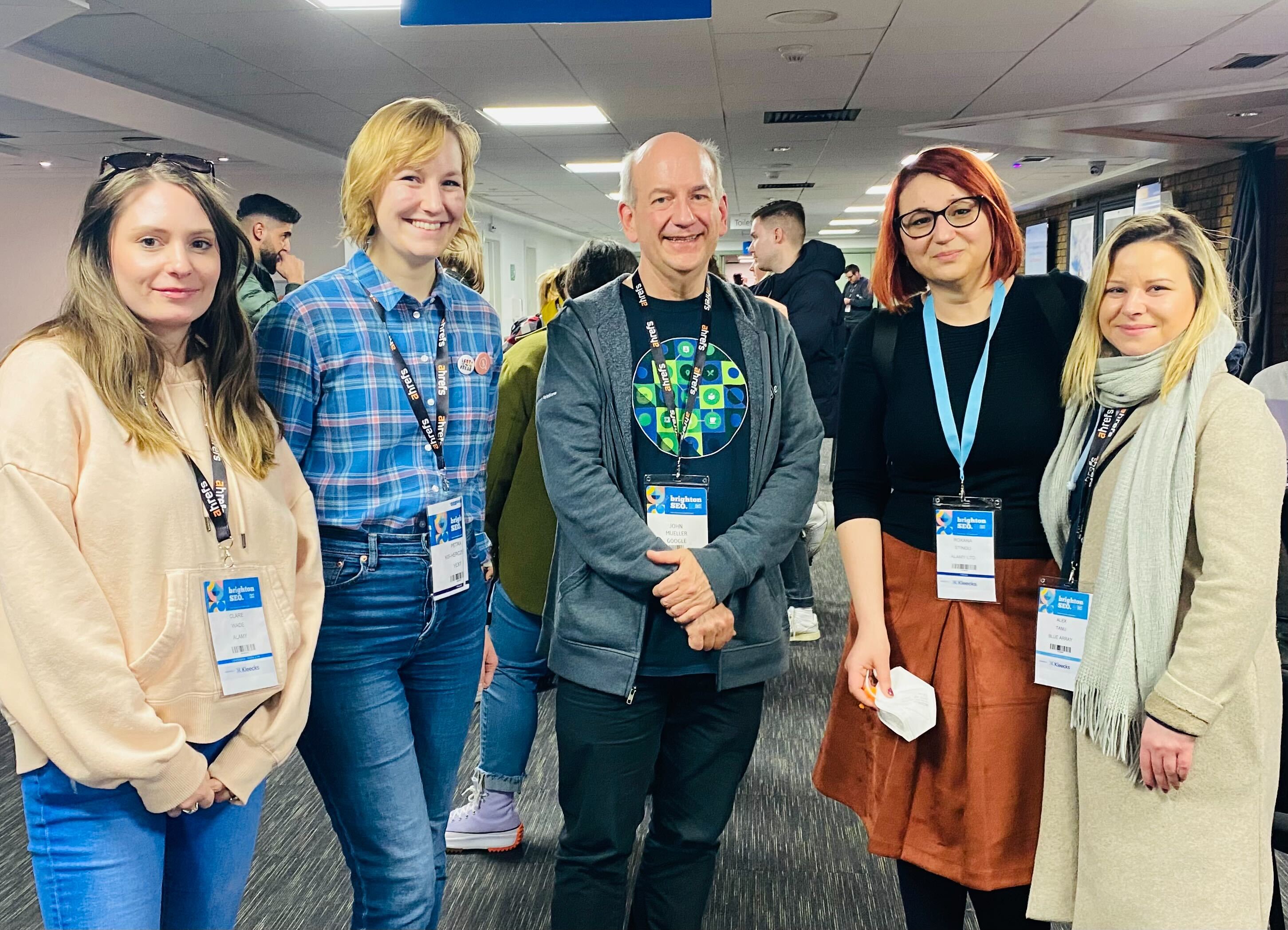 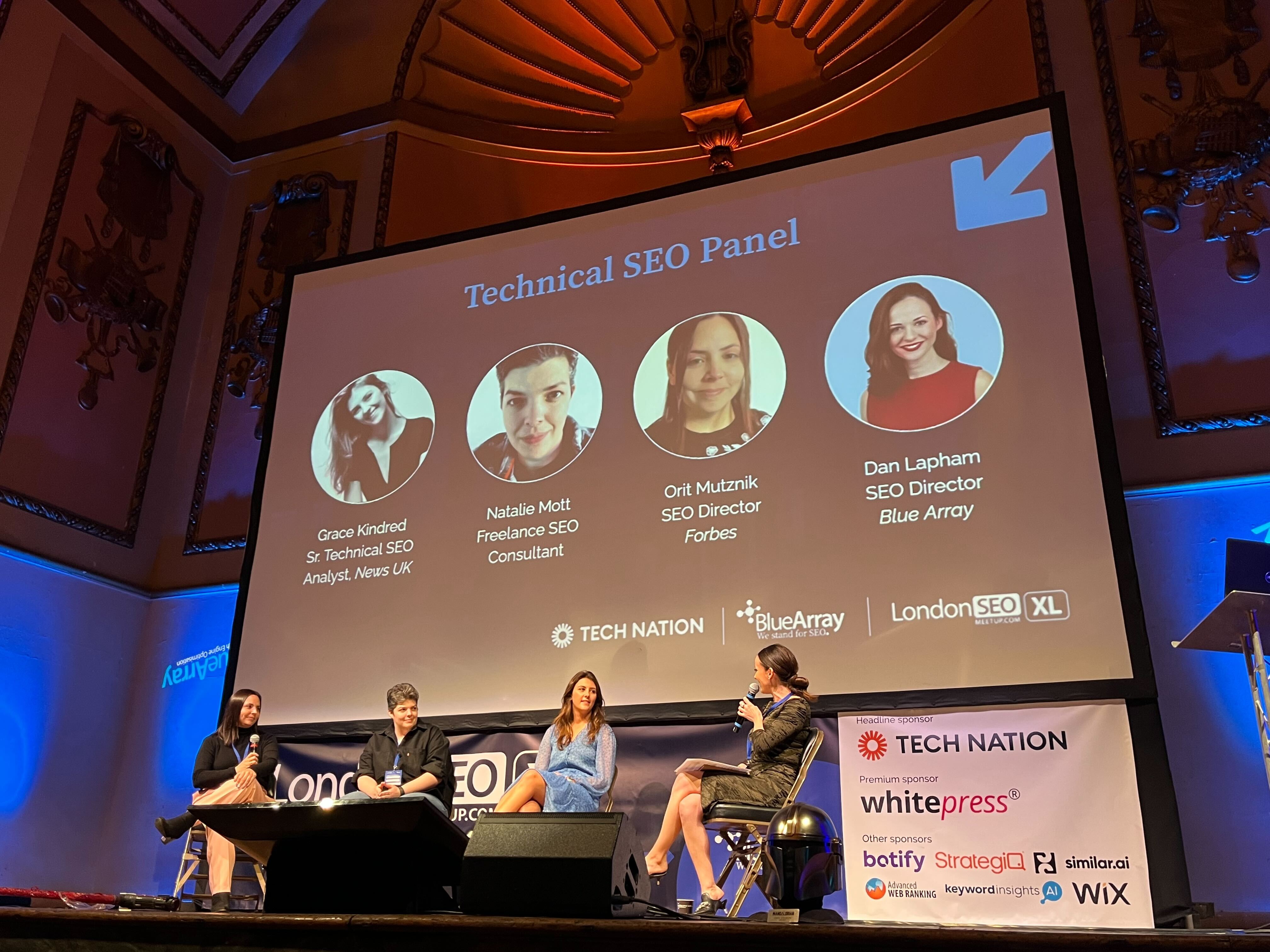 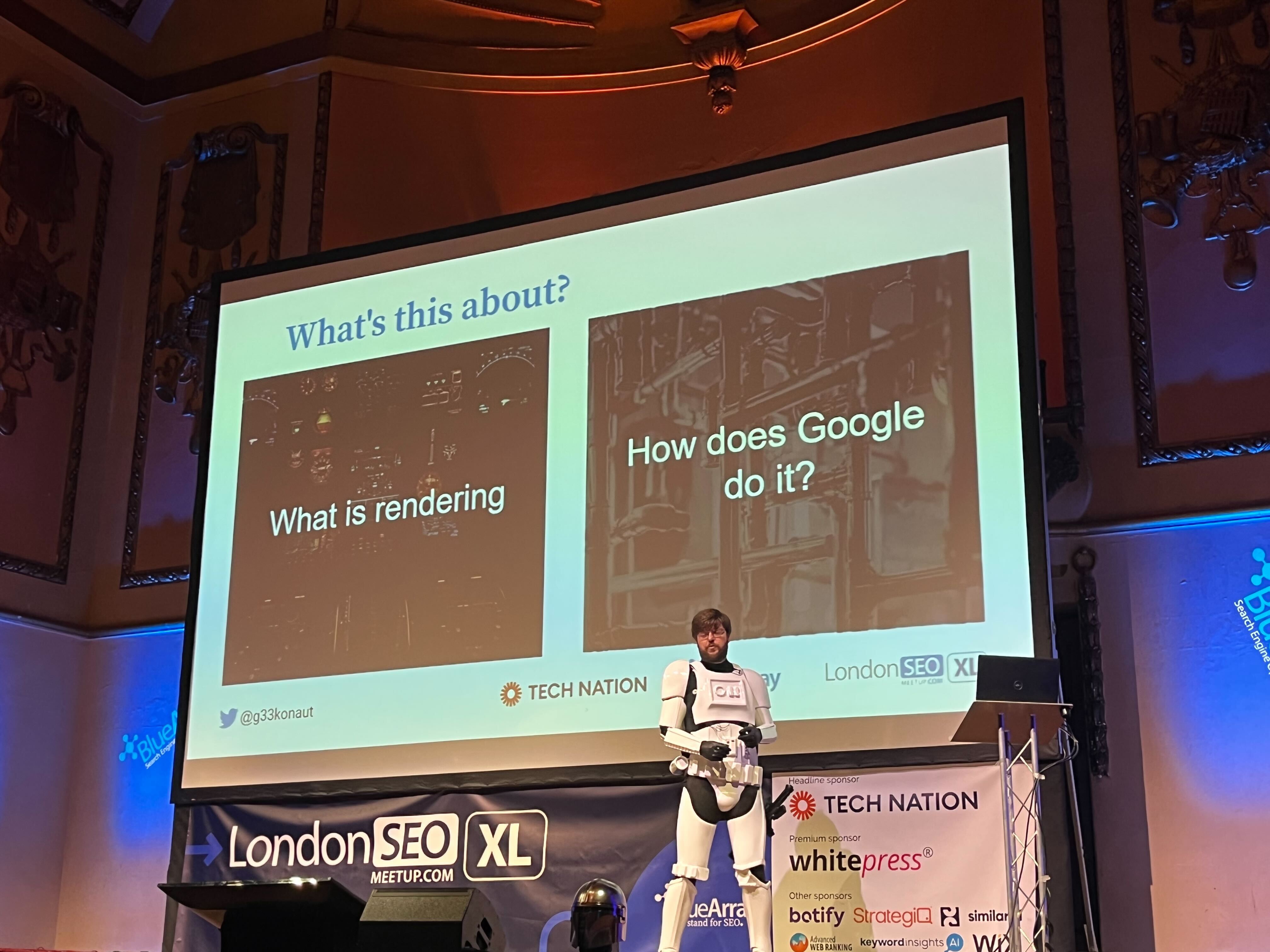 Google I/O was packed with updates and exciting things to look forward to from the introduction of multisearch to improvements of conversational AI, confirming it is certainly an exciting time to be in SEO.

There's also a new buzzword in the SEO world with the release of multisearch which does seem to be similar to Google's newest AI algorithm, MUM (Multitask Unified Model), that was announced back in September last year. Multisearch is now available in beta in the US, and will allow users to search using a combination of image, voice, and text. While these types of searches aren't using MUM at the moment, Google says that they 'might be enhanced by MUM' in the future.

Google's new multisearch algorithm will certainly transform the world of local search. This new algorithm will allow people to use image and text search together, in combination with 'near me' local searches. So instead of searching for 'italian restaurant near me,' we will be able to search with a picture of Cacio e Pepe and enter 'near me' to get the most relevant results. This will be rolled out later this year.

At Google I/O, we also heard a bit more about the next generation of Core Web Vital (CWV) metrics, Interaction to Next Paint (INP), which is an experimental field metric that measures responsiveness better than FID.

Lastly, Google also hosted its third virtual Unconference, which is a range of interactive conversations around a specific SEO topic, facilitated by industry experts from the community.

As announced in March, the URL parameter tool has now been deprecated from GSC (Google Search Console). SEOs can continue to use robots.txt for disallowing the crawling of parameters, noindex tags to control indexation, and hreflang to control localized content. Google says, "Going forward you don't need to do anything to specify the function of URL parameters on your site, Google's crawlers will learn how to deal with URL parameters automatically." Whether you trust that or not is up to your own data and judgment, but it might be handy to look at alternative solutions, especially if you are dealing with a larger site that has faceted navigation.

Daniel Waisberg published a guide to quickly identify pages to optimize website performance. The article guides you through connecting GSC to GDS (Google Data Studio) and how to create a bubble chart that helps visualize low performing pages that could be improved. The optimization is done based on position and CTR. This is a great tool to identify the so called 'low hanging fruits' where adding schema markup and updating page content could quickly lead to some traffic wins.

April was a good month for LocalSEO, as Google released a new option to report fraudulent activity through their Business Redressal Complaint Form. The new option allows people to report a business on Google Maps that doesn't actually exist. While this is a manual process, it is certainly a necessary one in order to keep information reliable on Google Maps.

There's been some updates on scroll to text on sitelinks. Back in November, Google started testing the 'scroll to text' for sitelinks. The scroll to text feature has been live since 2020. This feature takes users to a specific part of the page based on the search query and often highlights the text snippet featured in the SERPs. As spotted by Brodie Clark, it seems that this has rolled out for the US on desktop.

As part of Earth month, Bing announced some ethical shopping feature updates. They included categories like eco-friendly, upcycled, or fair-trade fashion. They also provide ratings for how ethical a given brand is, which is powered by Good on You®. It's great to see an initiative like this from Bing, and it's certainly worth keeping an eye on these improvements.

When it comes to algorithm updates we all have our ways to track changes. Semrush, Mozcast, AccuRanker, Cognitive SEO, RankRanger, Advanced Web Ranking and BrightLocal's Local RankFlux are great ways to keep an eye on how volatile the SERPs are. My personal favorite is Semrush Sensor, as it tracks everything from industries to different SERP features. You can even create an embedded widget for your personal dashboards.

If you need the details on Google algorithm updates, it is always best to head to Barry's Search Engine Roundtable - Google updates section. There's no one who spots ranking changes and algorithm updates faster than Barry, so if you want nearly real time updates, you better follow him on Twitter too.

Google announced the rollout of its May Core Update on the 25th May. The rollout is likely to take 1-2 weeks and seems to have started off with a strong start, shaking up the SERPs. Google has not confirmed the percentage of search queries impacted by this update, but we do know that it's aimed to promote and reward great web pages instead of just penalizing sites. What this means is that unlike previous Google updates such as Penguin and Panda in the past, being focused on penalizing sites with spammy links and content from ranking, this update is focused on rewarding sites that provide relevant and helpful content for the user. This is the first core update of the year.

The big news of April was that the Product algorithm update finished rolling out on the 11th of April and there was high search volatility throughout April. A high number of these were unconfirmed, however most of the above mentioned SERP tracking tools showed high levels of fluctuation.

In March we've also seen a further update to the Local 'Vicinity Update' from the end of last year. This refresh on the 23rd of March, seemed to have corrected and reversed some of the results of the original update for businesses with keyword-rich business names and local pack listings that include a city name. Google's official guidance is that "Your business name should reflect your business's real-world name, as used consistently on your storefront, website, stationery, and as known to customers." This means refraining from any keyword stuffing in business names or city names in locations.That said, we all know that sometimes these keywords are part of a brand's truename and that is exactly why this policy caused problems for many businesses. Google seems to have recognized the negative impacts of their previous decision, which is why the industry was pleased to see these corrections in March.

The big thing about algorithm updates is that they can be difficult to communicate to the business internally and usually aren't a sign to change anything on your SEO roadmap and there's usually no quick fix for a core update. Google offers an official documentation on what to look for with core updates and it mainly focuses on continuing to follow SEO best practice. Areej AbuAli has a brilliant thread on twitter on how to deal with getting hit by algorithm updates.

Some other updates from the world of Bing, they announced that they are changing the Bingbot user-agent and deprecating the current one in Autumn 2022. This is to reflect the latest version of Microsoft Edge, which is the web rendering service Bingbot has used since 2019. Microsoft Edge is powered by Chromium (the same technology used by Googlebot) and it is an evergreen user-agent, which means it regularly updates to the most recent stable version of Microsoft Edge. This technology is there to remove friction and concerns of how search engines can understand JavaScript websites. Also, when it comes to Bing, it is worth keeping in mind that they partner with search engines such as Ecosia and DuckDuckGo, so when Bingbot gets an update, the whole partner ecosystem benefits from it.

There are updated guidelines on AI-written content that goes against Google's guidelines. John Mueller says that content automatically generated with AI tools is considered spam, but makes no claims about Google being able to detect this automatically. However, if we closely look at the guidelines Kenichi Suzuki spotted, this guidance is specific to content that's intended to manipulate search results. Apparently, this line has always been part of the more detailed document, but this vague language leads to even more questions. What's considered 'intended to manipulate search results' is currently up to everyone's own interpretation, apart from a few examples Google highlights. A basic principle is - of course - that the content needs to be helpful for the user, and that AI content should be reviewed by humans. If (or shall I say when) AI content reaches a standard to be used regularly, it could certainly be a game changer to be able to scale content creation.

Google released a report on how they fought webspam in 2021. They caught 200 times more spam then when they started thanks to their SpamBrain algorithm, which was originally launched in 2018. Scams and spam sites are a big threat to users and also decrease trust in the search engine, so it is a top priority for all search engines to fight this.

Regarding the Gender Gap in SEO publishing, Lidia Infante created an incredibly insightful study on gender representation across major SEO publishers. It turns out, 69% of published articles are written by men. Publishing can help people drive career opportunities, higher salaries, and elevate their personal brand. Alongside the clear advantages one can have by having online presence and visibility, it would also be important to have a diverse representation of voices and opinions.

Note: The graphic below belongs to Lidia Infante. 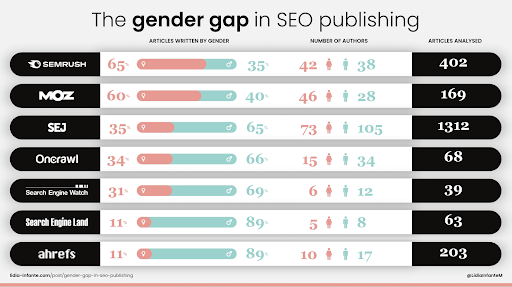 That's all folks for our Spring recap. To keep up to date in the meantime there are some great newsletters listed below that you can sign up for!

On the 17th of May, the world lost a great SEO and a brilliant person Bill Slawski. The news were shared over twitter by Go Fish Digital, where Bill was Director of SEO. He was known from his great work helping the SEO community read and analyise Search patents in his SEO by the sea blog. The reaction of the community to the sad news shows the impact Bill had. Sending our deepest condolences to his family and friends. Rest in peace.