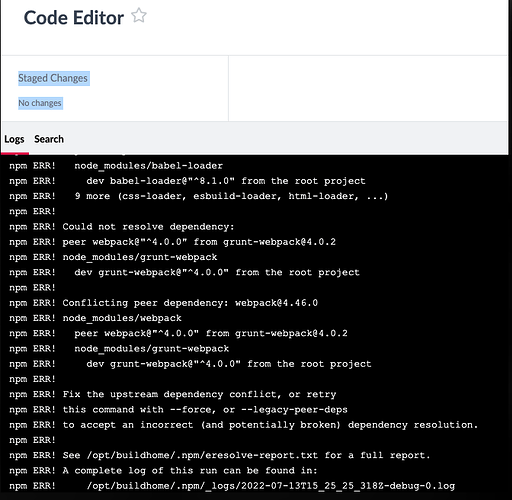 If you experience the above live preview issue with grunt-webpack, you should be able to resolve the issue by specifying grunt-webpack version 4.0.3 in your package.json.

Please comment below if you continue to experience any issues!

If you’re still seeing issues, try this fix as well:

Hi Everyone - On July 12th (yesterday) the npm package serve released version 14, which drops support for node 12. This update resulted in live previews running on node 12 no longer working. We’ve updated the answers-hitchhiker-theme’s template repo to no longer have this issue, however repos that currently experience this issue will need to be manually updated. Fix instructions: Open the ci/install_deps.sh file Change the second line, “npm install -g serve” to “npm install -g serve@13…

This issue has been addressed in the Theme 1.29.1 patch. For more info, check out this post:

We’ve released a patch to the HH theme that fixes an issue where Live Preview would not start if you were on a certain node version. This issue was due to incompatibility between the grunt-webpack and webpack v5. Previous versions of grunt-webpack had the following peer dependency: webpack: ^4.0.0 . This caused issues for certain Node versions because we use v5 of webpack . However, v4.0.3 of grunt-webpack has the peer dependency: webpack: ^4.0.0 || ^5.0.0 . Ultimately, this resulted in an iss…