Sign up for Hitchhikers to get full access
If you're already a Hitchhiker, log in to access this content.
Log In Sign Up
Mission Complete! 🚀
Congratulations, you’ve completed your first module! We hope you enjoy exploring the rest of the site. Please don’t forget to leave us feedback - we are constantly looking to improve. Happy Hitchhiking!
Home
Welcome to Hitchhikers! 👋
To learn more about the platform we encourage you to get started by completing the Hitchhikers Program Track and earning your first badge!
Start Here
Error

<% error.body %>
Email us at hitchhikers-support@yext.com to get this issue resolved. Include a text copy of the above message to help expedite the process.
Email Support
Warning

In this section, you will learn:

While Search automatically returns results based on relevance, a business might want to adjust the search results for specific queries. Search Merchandiser is an easy way for Administrators to modify their search results in Search experiences using a drag-and-drop, point-and-click interface. This tool allows you to make changes directly within the search results with three modes:

Making changes in the reorder entities and reorder verticals modes will create or edit query rules under the hood. Changing featured snippets will add to experience training. Thus Search Merchandiser will be particularly useful for Administrators who aren’t familiar with query rules and Experience Training, or those who simply prefer to modify results through a quick and easy visual interface.

Access the Search Merchandiser via Test Search, either full screen or the side bar, by clicking on the pencil icon to edit the search results. Each action has a separate page for you to make changes on. Once you select a mode, these cards collapse into icons, allowing you to switch between modes while saving space on the page.

You can feel free to move between modes while making changes. If you make changes on both the Reorder Entities mode and Reorder Verticals mode, they will save in the same query rule. Once you make a change, you’ll notice the icon for that mode will say “Edited”. The query rule you create will be shown on the right side of the results. We’ll go into more detail on each mode in the following sections.

In the Reorder Entities mode, you’ll see an interface to move entities to the top or bottom of each vertical’s results. You can also add new entities to the result set by clicking “Search entities” in the blue boosted zone and using the entity picker to select entities to add. Only entities that are included in this vertical will be shown. In other words, the entity picker respects any entity types and saved filters set in the backend config for this vertical. Added entities may only show in the boosted zone and removing it causes it to be removed from the results altogether. Editing the order of entities returned creates a query rule, shown on the right side, that updates as you move entities around. The rule has:

Learn more about the boost and bury entities actions in the Action - Boost and Bury Entities query rules unit.

In the example below, we edit the results of the FAQs vertical for the query “Open jobs.” The FAQ “Are you open on the weekends?” is returning due to the word “open” in the search query, but it is irrelevant, so we bury it. We want to make sure the FAQs “What are the perks of working at Turtlehead Tacos?” and then “What is the application process like?” always show up in that order, so we boost it and rearrange it to that order.

The Reorder Verticals mode is similar to the Reorder Entities mode, except it involves reordering verticals instead of reordering entities. In this mode, the user cannot see individual results. They only see the list of verticals and result counts, like so: Editing the order of verticals returned creates a query rule, shown on the right side, that updates as you move verticals around. The rule has:

Learn more about the boost and bury verticals actions in the Action - Boost and Bury Verticals query rules unit.

Back to the same example, let’s say we want users looking at open jobs to read some job FAQs before diving into the job entities. We can boost the FAQs vertical and then the Jobs vertical, and set it in that order. We also noticed earlier the Help Articles vertical only had one result (“How to place a new order online”) that was not relevant, so we want to bury that vertical and make sure it shows up last. Since we covered all the verticals in the results, we actually don’t need to boost the Jobs vertical, so we return that to the normal verticals section. 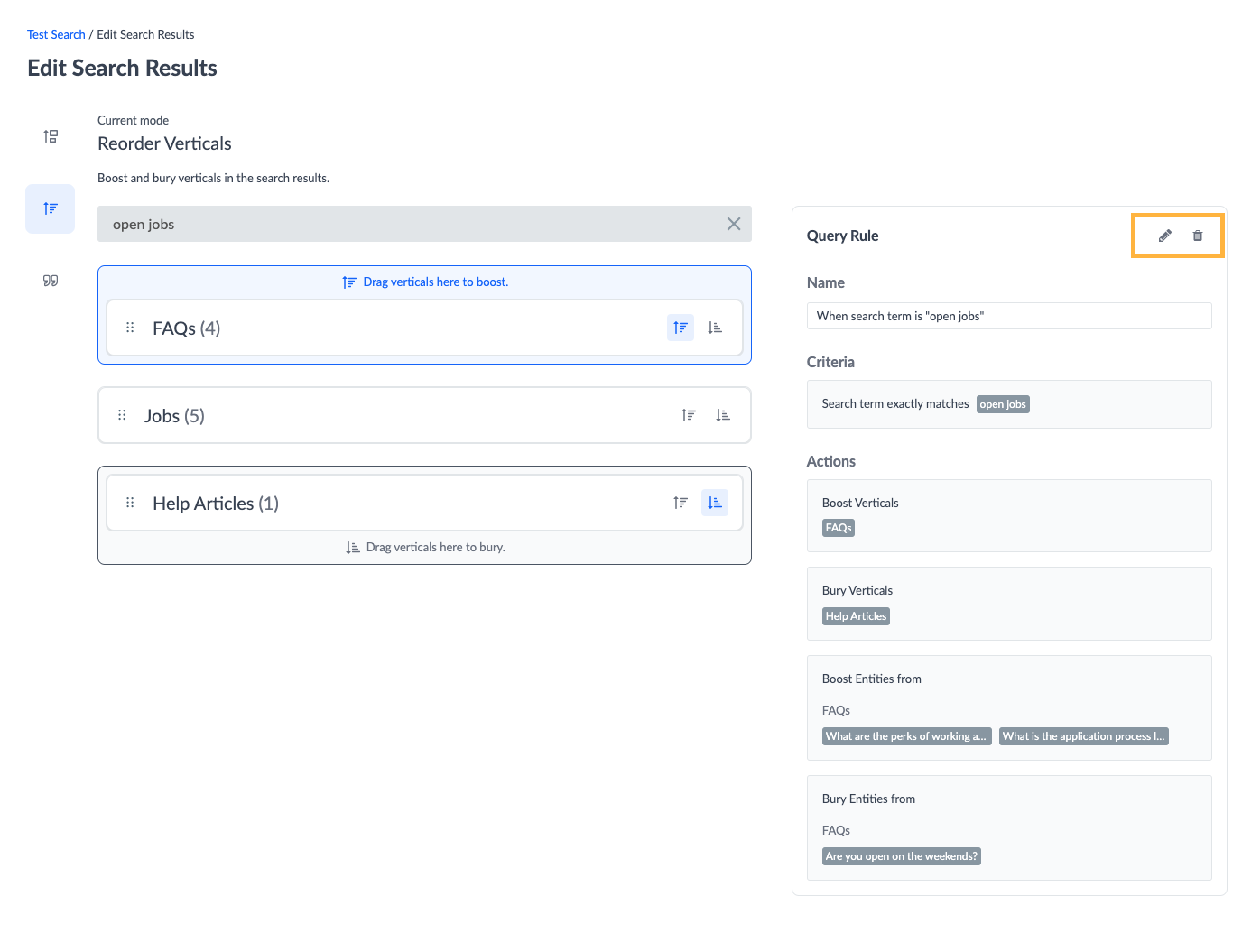 Opening the Search Merchandiser for any search terms that already have a query rule will show the existing query rule on the right hand side.

Currently the Search Merchandiser only supports:

If you enter the Search Merchandiser for a search term with multiple query rules or with a single query rule that has criteria or actions that are not supported, you’ll see a warning message (or multiple) in the Query Rules sidebar. Click the pencil icon to edit the query rule on the query rules page. The Change Featured Snippets mode uses Experience Training (not Query Rules like the first two modes), so it is independent of the other modes. You’ll only see this mode if the experience has a vertical with Document Search turned on. Otherwise there would be no Featured Snippets to train! How do you navigaate to the Search Merchandiser?

Which of the following is true about the order entities/verticals will appear using the boost/bury actions?

The Change Featured Snippets mode is not showing up in your Search Merchandiser. What is the most likely reason?

You're out of this world! 🌎